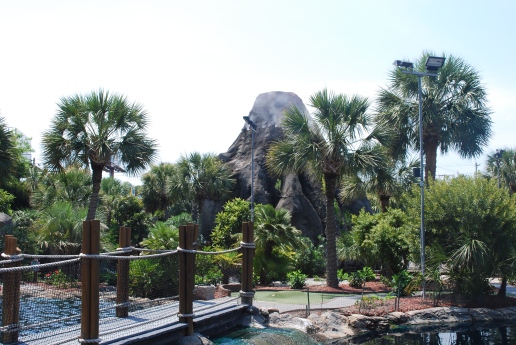 Review: Giggling like a empty-headed schoolgirl on her wedding day, I finally arrived at my own personal Mecca. Myrtle Beach: the mini golf capital of the world. Featuring over 50 mini golf courses along a 20 mile strip, Myrtle Beach has more mini golfers per capita than any other place on earth. Including Spain!*  But after driving for thirty minutes, ignoring the Atlantic Ocean to gaze at a far more impressive ocean (filled with miniaturized fairways instead of water), I was struck by a sudden fear: by only reviewing one course per state, wouldn’t I miss out on all that Myrtle Beach had to offer? What if I reviewed the wrong course? If I really wanted to find the best mini golf course in the nation, shouldn’t I give up my precious beach time/food budget and instead spend 5 hours outside in the blinding sun reviewing mini golf until my entire body was sunburnt to a crisp?

The first course I reviewed was Hawaiian Rumble Golf, proclaimed by both Golf Magazine and the Travel Channel as the “#1 mini golf course in America.” But, like so many self-styled “social media gurus,” this designation may simply be an empty, meaningless title – does the course actually live up to all the hype? On paper it certainly does, Hawaiian Rumble is currently the home course to the US ProMiniGolf Association, hosting its annual Master’s tournament. This year, the mini golf Master’s will be offering a $20,000 cash purse to its mini champions, which is enough to purchase 38,400 mini golf balls, 2222 rounds of mini golf at Hawaiian Rumble, or even a black market kidney sold in Delhi (with enough money left over to buy 9,600 mini golf balls). And, going in, I was hopelessly optimistic. The setting was a perfect Hawaiian getaway: parrots greeted you at the entrance, the cashier gave away a plastic lei with every purchase, Hawaiian music filled the course, and a giant volcano at the center of the course gave out a 30 foot tall burst of fire every twenty minutes. It was just like putting a round of miniaturized golf in the heart of Hawaii. Or at least I think so, I’ve never been mini golfing in Hawaii… Yet.

But Hawaiian Rumble truly was a “professional” course. In every sense of the word. It had wooden bleachers placed strategically around the course so the die hard fans could watch the pros putt in the height of luxury (sitting upon their thrones of pinewood, eating their grapes, and laughing at the plight of the commoners too meek to pursue the noblest of sport). But it was also kind of boring. Every hole was par two. And none of the holes were that exciting. It makes sense why you would choose this place as a tournament course, but playing recreationally, this course felt like the miniature golf equivalent of semi sweet chocolate chips. They’re good, but when I’m eating mountains made out of chocolate I expect them to have pure, unadulterated flavor, not bland, but professional compromises. In the end, Hawaiian Rumble was a delightful, if mundane, little course. But was it the best in America, Golf Magazine? Was it even the best in Myrtle Beach, the Travel Channel?? Only time will tell.

*Moreover, given this high mini golf density, Myrtle Beach is also the location where a mini golfing serial murderer would most likely reside. But what does that mean? What is a mini golfing serial murderer? Is it a mini golfer who uses his love of the sport as an excuse to murder innocent tourists? Or, more worryingly, is it a seemingly ordinary tourist who murders mini golfers just because they resemble his own father? The world may never know. Fortunately, the only thing that came close to killing me while putting was my own excitement! And heatstroke.

A place for the fans to sip their decadent iced lattes.

The pinnacle of excellence.

Course Score: 42; par – 36
Pros: Great upkeep; great environment; the pinnacle of professionalism.
Cons: The carpet was slightly worn from overplay; every hole was par 2; the holes were pretty wide; if you’re not intensely professional about mini golf, this course is not for you.