Review: Let’s cut the chit chat. We don’t have enough time for some vague introductory paragraph that contextually situates New Hampshire as a part of America. And sure, I’d love to discuss how New Hampshire declared independence from England six whole months before America signed the Declaration of Independence* or how the first potato in the US was planted in New Hampshire in 1719 (the same year that Lichtenstein was created… 1719 was a pretty good year!) No. Despite the fact that I would love to talk about all those things,** I need to talk about Chuckster’s. For those of you too busy doing whatever it is people do when they’re not playing mini golf for two months (I wanna say… Ouija boards? I may have lost touch with the common man on this trip), Chuckster’s is the home of the longest mini golf hole on the planet! With a record length of 201 feet, Chuckster’s’ world-famous hole 13 is about half the length of the average par 3 big golf course. It is a very long distance.

But there are many things that a person can do with 201 feet of space. Were they so inclined, they could store up to 201 foot-long hot dogs end-to-end for later consumption. They could store one hundred and thirty four 18-inch-long hot dogs end-to-end for later consumption. And they could even store one 201-foot-long hot dog for immediate consumption (because why wait for perfection?). So then, with all of these potential replacements, the question remains: did Chuckster’s make good use of its space?

Certainly the venue itself, while perhaps lower budget than many of the courses I’ve previously visited, was nice. Located amidst the beautiful New Hampshire evergreens, the course was picturesque and tranquil, surrounded by boulders and bright blue rivers, creating a scenic enclave from the pressing troubles of the modern world.*** And sure, it was somewhat minimalist (there wasn’t really much to the course besides the nature surrounding it), but it was nice. Several of the holes were complex. Several were simple. Some were in good condition. Some were a little faded. Essentially, it was the mini golf equivalent of a La Quinta Inn. Sure, it’s not the Ritz-Carlton, but it’s still a quality establishment with a proud connection to its local heritage.****

But enough stalling. How was the hole itself? You know, the really long one? The one which, in days of yore, would have epic poems written in its honor as a testament to the productive might of man who tamed the world around him and remade it in his image?

Yeah. I mean, it was pretty cool. Definitely worth doing. Don’t get me wrong. It was a par 3 hole, which essentially means that you just watched your ball slowly roll down a hill for 190 feet before putting the other 11. But it was cool. Like spitting off the Empire State building. Or throwing a live pigeon into a moving vehicle. There was a majestic splendor to the whole event. However, since this hole was built on the side of a mountain (so that the ball could roll 201 feet unaided) did it mean that the course’s other holes were very steeply inclined and, as such, infuriatingly difficult to play? Yeah. I guess. But that’s just the price you’ve got to be willing to pay to say that you’ve finally played mini golf on the longest mini golf hole on the planet.

* Which, wow, imagine if the rest of America hadn’t signed the Declaration of Independence. That’s kind of like proposing to someone on the second date. Sure, she looks beautiful right now in the dim overhead florescent light of the Olive Garden, but that doesn’t mean she wants to spend the rest of her life with you…
** So much so, that I already did.
*** Troubles like… shaking your Ouija board too vigorously and angering the spirits of your deceased predecessors. Is that something the kids still do?
**** Wait. Hold the phone. I don’t actually think La Quinta Inn was created to celebrate its Spanish culture at all. It was just made by two white guys in the 1960’s. This changes everything… 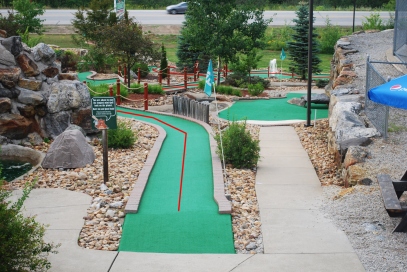 Look at that course!

I mean, it’s kind of complicated…