Review: Ah, North Dakota. The land of sunflowers and strong farm folk who work the land with their firm and calloused hands.* Although North Dakota’s state slogan is just the word “legendary,” the only legend I knew about the state was the film Fargo… so I came in with a very skewed perception of what North Dakota was all about. But it’s a neat place: an expansive flatland where it’s (almost) impossible to sleep in your car because the stars shine so dang brightly. A vast prairie where you have to accelerate your car to +100 MPH just to keep up with the surrounding traffic (only to pull over at a rest stop in Rapid City, SD and find that a dead bird has been comically sandwiched in the grill of your car for the past 250 miles**).

With four state-wide locations and a 15 year history, Thunder Road is one of North Dakota’s most iconic institutions (right behind the Teddy Roosevelt National Park and that one strip of highway where, annually, millions of drivers undoubtedly also commit vehicular birdicide). Employing an adventurous volcano/tiki theme, their Fargo course was a fun, above-average escape from the daily North Dakota grind (a grind involving… cartography? I never really got a good grasp of the state’s employment opportunities). Unfortunately, this course was just like a see-saw placed between a fence separating fat camp from a Gandhi lookalike convention: unbalanced.*** The venue’s two 18-hole courses were overall quite nice, but ultimately had a fluctuating level of quality. Both featured a strange combination of interesting, unique holes that conformed to the contours of the land and incorporated surrounding water hazards; but both had many boring, uninspired straightaway holes. Both had holes that were clean and freshly carpeted; but both had holes that were worn down, water damaged, and slick (in fact, several holes were so worn down that a light breeze ended up pushing my ball several feet in the wrong direction. That’s madness! The only thing a light breeze should do is muss the hair of a young boy in a 1960’s sitcom. Not play God with my mini golf short game.)

Even the environment itself was a confusing bundle of contradictions. The course featured a delightful hike up a massive volcano, skirting over flowing rivers and classic North Dakota brushland (in this respect, it kicked the pants off the only other volcano course I’ve reviewed on this trip). But the lake that all of these rivers flowed into was murky and sinister. I don’t know. It was, overall, a quite enjoyable course. Especially given that it was conveniently located in North Dakota’s most populous city. But, at the end of the day, it unfortunately reminded me of the state of North Dakota itself: pleasant, inviting, and full of nice, hardworking salt-of-the-land farm folk; but so contradictorily rugged and harsh that it could make you accidentally murder a bird with your Subaru and you wouldn’t even know it.

I realize that that last metaphor didn’t necessarily make sense, but it was a very traumatic experience. Just let me have this small victory.

* If one of these “real men” ever heard what I was doing with my summer, they’d slap me all the way from Dickinson to Bismark.
**  😦
*** I don’t care what anyone says. That joke was totally worth it. 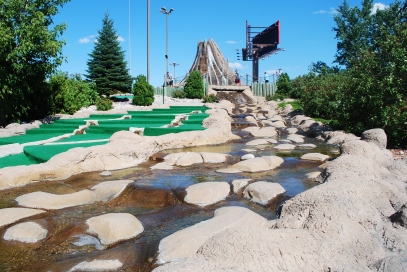 Unfortunately, you miss the visual of me on my stomach taking this photo.

Check out that cool hole!